Non-energy costs comprise environmental taxes, wholesale distribution and transmission costs that are issued from the Government and Ofgem and are then passed through by your supplier and built into contracted electricity rates. These costs are updated quarterly/bi-annually and cover around 60% of your electricity bill.

The Climate Change Levy is an environmental tax charged on the energy consumed by commercial users. It is designed to encourage businesses to be more energy efficient in how they operate and reduce overall emissions.

The CCL is paid at either the main rate or carbon price support (CPS) rate. The CPS is a discounted rate which is for businesses who own generate their own electricity. 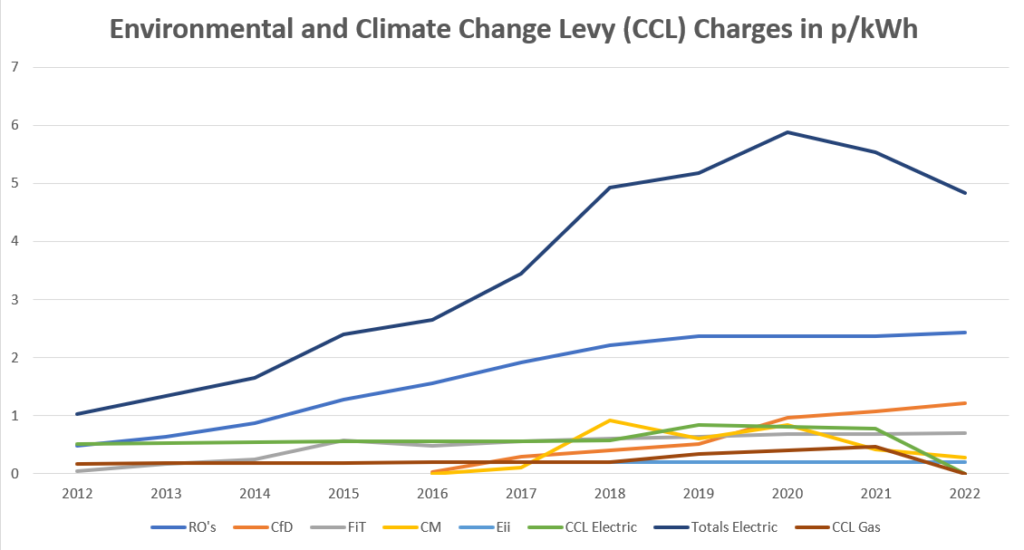 This is a government programme designed to promote the uptake of small-scale renewable and low-carbon electricity generation technologies. It is an incentive to pay businesses and property owners who generate on-site renewable energy through small scale projects. It was introduced in April 2010 and requires participating licensed electricity suppliers to make payments on both generation and export from eligible installations. FiT payments are made based on meter readings taken by energy users. The FiT scheme was closed to new applicants from 31st March 2019, but existing installations will continue to receive FiT payments as previously agreed.

Balancing Services Use of Systems (BSUoS)

The BSUoS reflects the costs of balancing the system, such as running the national control room, frequency response arrangements and other ancillary services. These charges are based on the volume of energy put onto or taken off the transmission system in a half-hour period. These costs will increase as we increase our reliance on renewable energy sources, unless we can develop a large scale system to store electricity for when it is needed.

Distribution Use of System Charges (DUoS)

The DNUoS covers the cost of using the distribution network which is your local network e.g. UK Power Networks. The costs charged recover payments for installing and maintaining these networks. Your charge is based on volume of electricity used, which is passed through the Distribution Network. Rates vary depending on your region, as well as time of day, and are represented by a Red, Amber, Green scale of charges. You can identify which rates apply by finding the ‘Line Loss Factor’ for your site and looking it up on your DNO’s scale of charges.

Complete the form below and get in touch with a member of our team today!